1 million refugees and IDP of Nagorno Karabakh want to go back - www.eutribune.com Müsahibə

(By Special Correspondent in Baku, Azerbaijan):

Dr Shahid Qureshi British election observer and Chief Editor of The London Post was invited to visit the Parliament of Azerbaijan after the presidential elections. Honourable Javanshir Feyziyev, MP (member parliament) and Co-chair of the EU-Azerbaijan Parliamentary Cooperation Committee welcomed and showed various sections of the parliament. He is an impressive, knowledgeable and well-read politician of Azerbaijan. He holds a PhD and have written 8 books and over 150 articles on ethnopolitical conflicts and globalization. Dr Shahid Qureshi did an exclusive interview for the readers.

Question 1. Both Azerbaijan and Armenia have newly elected presidents in past week. What both presidents should be doing?

Both presidents have been elected newly and almost at the same time. They have both a lot to do for their countries. But most important, urgent and common problem to be solved for both countries is Nagorno-Karabakh conflict. The presidents need urgently to start negotiations on the peaceful settlement of the conflict. That is in the best interest of both parties, as well as the region in general.

Question 2. After 25 years of stalemate on the issue of Nagorno Karabakh, where you see the issue going? What is the historical position of the NK?

Nagorno Karabakh issue is a conflict imposed on both parties by a superpower to keep both of them in its sphere of influence. Unfortunately, “Divide and rule” approach is still working. The conflict is against the national interests of both countries. But one of the sides – Armenia is not able to take into consideration its own national interest and to negotiate directly with Azerbaijan, as the country is not enough independent to do so. Concerning the historical position of the NK, it was always Azerbaijani land during thousands of years. First, Armenians have been moved to NK after 1828 Russian-Persian Treaty. By a special Decree of Russian Tsar Armenians living at that time at the borderline between Iran and Afghanistan have been moved to Azerbaijan, mainly to Karabakh. Second wave of massive arrival of Armenians to Azerbaijan happened after the 1st WW, when Azerbaijan kindly accepted the Armenian refugees from Ottoman and Syria, settled them in Yerevan and NK, having demonstrated a goodwill. At the time Yerevan region was 100% populated by Azerbaijanis. In both cases Azerbaijanis accepted the Armenians with respect and dignity, accommodated many of them in their houses, helped them to start a new life on a new land. In 1978 Armenians have erected a giant monument in NK, dedicated to 150 years anniversary of their arrival to these lands and there were big celebrations by Armenians. The monument is still there but the wordings on it have been erased during the last conflict.

Question 3. What could be solution acceptable to both parties What are the UN resolutions on the issue and why those not implemented?

Since the conflict started, Azerbaijan is calling to settle the problem peacefully and within international legislation. There were special UN Security Council meetings called by Azerbaijan and in 1993 the Security Council has adopted 4 Resolutions, urging Armenia to withdraw its military forces from the occupied territories immediately and unconditionally. They remain still unfulfilled and as a result 1 million Azerbaijani refugees and IDPs are still waiting to be allowed to go back to their homes. OCSE Minsk Group who is in charge of the peaceful solution of the conflict could not change the situation during more than 25 years, although it recognizes that status-quo is not acceptable. Many international organizations have tried to persuade Armenia to put an end to the occupation. But Armenia is rejecting all kind of settlement projects. Every time a new peace plan is elaborated by different international bodies, Armenia is escalating the situation on the front-line and manipulating the current situation to postpone the peaceful solution of the problem.

Question 4. What is your expectations from UK and EU on the NK issue and What is the legal position of the NK?

Legally the region is an integral part of Azerbaijan, unfortunately being at the present time under occupation of Armenia. Azerbaijan’s expectation is fair treatment to the parties to the conflict and contribute to the immediate solution of the conflict in the interest of both nations. The fact of occupation have been confirmed by many Resolutions of the international organizations, including UN, EU, EP, PACE and other institutions. We also appreciate very much fair approach of the UK. We expect the powerful international organizations and States to use all possible legal means and their efforts to bring overdue peace to this small, but strategically important region. First of all, this is vitally important for about 1 million refugees and IDP, who are desperate to go back to their homeland. Second, the Caucasus, situated on the old Silk Way (Road) between Europe and Asia is very important geopolitical region for the world. The solution of this long-lasting conflict could bring peace, stability and security to the region and it could be a good precedent for solution of the similar conflicts in Georgia, Moldova and Ukraine.

Question 5. Thousands of people killed and displaced in the NK area. Is there any case in the local criminal court against those who ordered and carried out atrocities on innocent civilians, men, women and children?

At the first stage of the conflict in 1988, about 250 thousand Azerbaijanis have been deported from Armenia. Immediately after that 80 thousand Azerbaijani people, living in the Nagorno-Karabakh have been pushed out of the region, humiliated, brutally killed and wounded. Their villages and towns in the Nagorno-Karabakh have been totally destroyed and burned. A lot of atrocities have been committed during the war. The most terrible act of these crimes was Khojaly massacre in February 1992. The Armenian troops attacked a town of 7 thousand which had been already under siege for few months. 613 civilians, including up to 300 children, women and elderly, were ruthlessly murdered. This brutal attack was not simply an accident of war, it was a part of Armenia’s deliberate and premeditated policy of terror to intimidate others into fleeing the region, allowing Armenia’s army to occupy Nagorno-Karabakh and other regions around. The attack on Khojaly has been carried out under the guidance of the field commander Serj Sargsyan, who became later president of Armenia. Finally, another 7 regions, surrounding the NK have also been ethnically cleansed and more than 700 thousand Azerbaijanis of these regions have fled their homes. Altogether about 1 million people are refugees or IDPs now and they have been settled temporarily in different parts of the country. In total, about 870 villages and towns are under occupation, more than 24 thousand people have been killed during the hostilities, 4 500 civilians have been taken hostage, mostly elderly people, women and children, the whereabouts of 4965 people are still unknown.

Question 6. Was there any trial in criminal or military court of the soldiers and commanders who killed civilians in Khojaly?

Many criminal cases have been initiated by the law-enforcement authorities of Azerbaijan, many cases have been investigated and most of the persons who committed the war crimes and crimes against humanity, have been identified. Most of them are in Armenia now and in some other countries. Moreover, some well-known field commanders, like Robert Kocharyan, Serj Sargsyan and many others succeeded in getting high governmental positions in Armenia, even becoming presidents. So, their extradition does not seem possible at the moment. But we believe somewhen Justice will happen and all of them will stand trial. 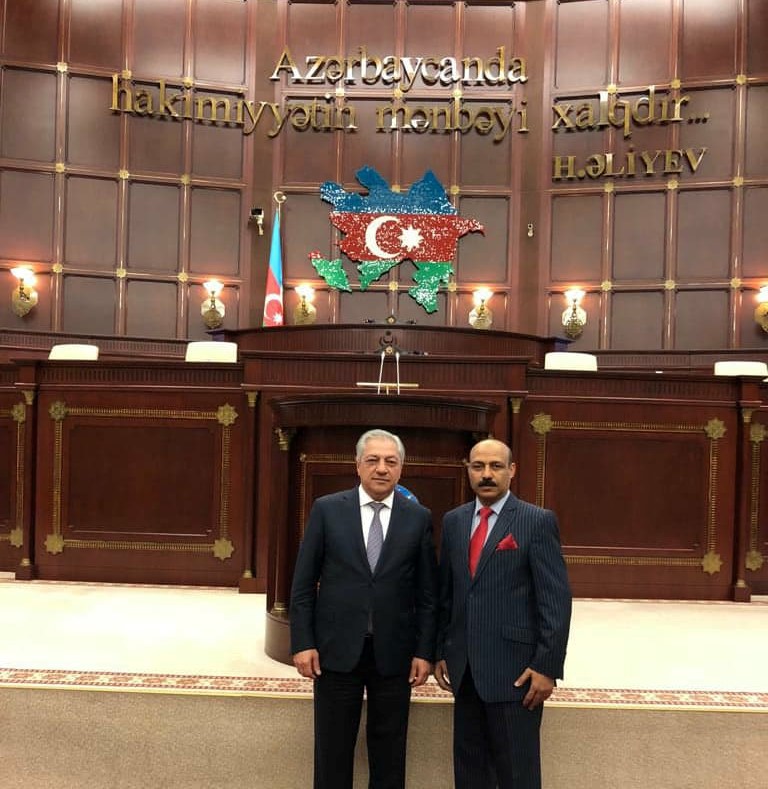 Thank you.
Disclaimer: views expressed are not of EU Tribune